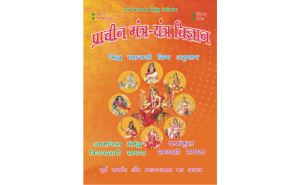 Salutation to you, O Mahamaya, the great illusion that has manifested in

the world, abode of auspiciousness and prosperity. O MahaLakshmi,

worshiped by all the Gods, one who holds conch, disk and mace in Her hands,

During the ocean churning, a most beautiful and gracious woman sitting on a lotus, carrying a garland of the same flower. Everyone stopped working as they were bewitched by so much beauty. Everyone wanted her, but she was the one to choose a husband for herself as women in those days were the ones who selected their life partners and were given full freedom in their choice.

Everyone tried to please her with beautiful gifts and great praise in an effort to entice her, but she found some fault or the other in all until she saw Narayan — calm and serene and without passion that seem to affect all others. Laxmi walked straight to him and put the garland round his neck and stood by his side but the Lord placed her on His chest and they both glowed like lightning in a thunder storm. After that He could do nothing without her.

Time elapsed and Lord Vishnu and Goddess Lakshmi were staying happily in Vaikunth. Once the great rishis decided on performing a great yagya and at the end of it Rishi Bhrigu was given the task of finding out who amongst the three great Gods — Brahma, Vishnu and Mahesh – was fit to receive the first offering.

At the end of the yagya, Bhrigu took the offering to Brahma Lok in search of Lord Brahma, but found him engrossed with his wife Saraswati and they did not even hear him come!

This annoyed the rishi and he proceeded to Kailash in search of Lord Shiva. Lord Shiva too was busy making love to his wife Parvati and paid no heed to Rishi Bhrigu. Containing his anger, he thought he will still try out Lord Vishnu and went straight to Vaikunt, the abode of Vishnu and Laxmi. They also seemed to be oblivious to everything except themselves. The sage turned to go back in great anger at the disrespect shown to a learned man by even ‘Vishnu & Laxmi, but at that moment Vishnu saw him and caught hold of his feet.

Bhrigu was so incensed that he kicked Vishnu on his chest, still the God did not let go off his hold and appealed for forgiveness since even Gods cannot show disrespect to the great amongst the mortals. This annoyed Laxmi who told Narayan in no uncertain terms that he had no business to plead with a person who had kicked her dwelling place — ‘the heart of the Lord’!

— But Narayan kept on asking for forgiveness from Bhrigu. So, Laxmi left Vishnu and Vaikunt Lok and returned to her father – the ocean. Vishnu suddenly lost all his glory and riches and became very poor and powerless to do anything anymore. He loved Laxmi very much. So, he made his way somehow to the ocean to find his wife and bring her back.

The Lord of the Ocean refused to part with his daughter and return her to one who had scant regard for her. For a longtime he did not choose to hear the pleading of the distraught husband but finding that even his daughter was very fond of the Lord and didn’t really want to forsake him – he agreed but on the condition that Vishnu would give him riches beyond human imagination and dreams and then only he can take her again.

The poor Lord didn’t know where to get the money that his father-in-law demanded. Without Laxmi he was penniless. He thought hard and suddenly thought of Kuber who had so much wealth that no one could imagine. He at once went to Kuber and shared his misery. After listening to Narayan’s tale, Kuber agreed to loan him the money but on a very heavy interest, which had to be paid back before the cycle of time – before doomsday vanquished everyone and everything. The Lord promised that He will do so. That is how Narayan made his abode at Tirupati and made it the center of collection of funds. Of course, Laxmi is now with Him and thus, there is no dearth of money flowing into the Tirupati temple.

From this incident, it becomes clear how important Goddess Lakshmi is in the life of a human being. When Lord Narayan, one of Trinity Gods, can’t exist properly without her, how can we human beings even think to live a happy and prosperous life without her grace. Due to this fact only, the Goddess is worshiped across the globe, even though she is recognized by a different name.

In India, not only Hindus but also Buddhists and Jains adore Lakshmi. In the Buddhist Jatakas, there are tales of men and women who request the goddess Lakshmi to drive away the goddess of misfortune, Kalakanni. Images of Kubera, the pot-bellied yaksha-king and treasurer of the gods, who is closely associated with Lakshmi, adorn most Buddhist shrines. In the Lakshmi Tantra, the goddess says: “I am inherent in existence. I am the inciter, the potential that takes shape. I manifest myself. I occupy myself with activity and finally dissolve myself. I pervade all creations with vitality, will and consciousness. Like ghee that keeps a lamp burning, I lubricate the senses of living beings with the sap of my consciousness.”

Without any doubt, it is impossible to think of a balanced life without the grace of Goddess MahaLakshmi. One can easily see today that a person lacks in one field or other of life. If someone is wise, there is a dearth of wealth, one the other hand if some someone has wealth and intelligence, the person is not physically or mentally strong. A successful life is the one in which a person is able to strike a balance among all the aspects of life and this is possible only by the means of Dikshas in life.

Getting blessed with Maha Lakshmi Diksha during the auspicious time of Diwali is one step towards reaching this goal.